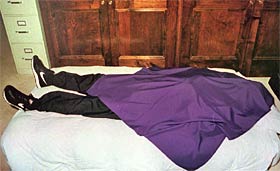 “Heidi Peterson, a San Diego pastry chef, had her eye on a commercial-size blender and was trying to ignore rumors that it had been used to mix the deadly applesauce.”

- ‘heaven’s gate items sold’, ben fox, associated press, november 20, 1999 on the auction of the belongings in the house where 39 members of the Heaven’s Gate ”Away Team” committed mass suicide by ingesting apple sauce and vodka laced with barbiturates.

only in fucking america- pop religion, the fatal candy colored kool aid of the masses, meets the searing, ghoulish tragedy of others- which always sells like sexy, irresistible hot cakes. who the hell (who is also not completely screwed up morally and psychologically) would want the goddamn bunk beds these lost, manipulated people died upon?

“Shawn Brennan, a salesman from Orange, said he plans to put the bunkbed he bought in a guest room.
‘I think it will make a good conversation piece when people stay over,’ he said.”

oh, yeah, shawn’s a thinker- a fucking golden tongued philosopher- known for his unparalleled witticisms, insights, and fancies - and such a gracious host. and save when hale-bopp makes it’s return engagement (circa 4385), i’d just say no to chef heidi’s applesauce.

23 march 1997 on the closest approach of the comet hale-bopp to the earth, members of the Heaven’s Gate ‘UFO cult’ begin committing suicide in a rented mansion in rancho sante fe, ca. they believed an alien space ship was following behind the comet- hale-bopp being their sign to ‘leave the earth’ by ‘shedding their containers’ in order to be received into the ‘kingdom of heaven’ before the apocalypse. a former cult member will find their bodies on march 26.

among those who took their own life is the brother of star trek’s Nichelle Nichols aka Lt. Uhura.

the official web site of Heaven’s Gate is still maintained although it has not been updated since the suicides. 2 humans are tasked with taking care of the site and media left behind by ‘the Group’ but have commented that they receive very few request for the materials.